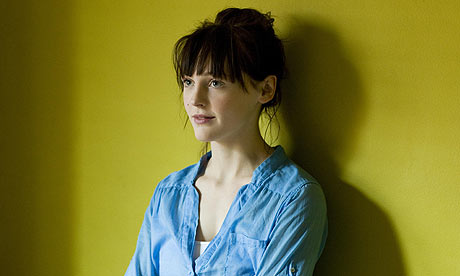 Laura Marling has been many things in the few years that she’s been in the indie spotlight. She has been the short-haired, white haired waif who was too young to drink at the venues she was gigging at, she has been the long-haired back-up for Noah and the Whale (notably in “5 Year’s Time”), and recently she has been the dark-haired adult touring India and the rest of the world. But she has always, always been an old soul, writing music most people her own age can’t even comprehend.

(For the record, I am a whole eight-and-some months older than Laura Marling.)

Part of the reason why her music is so haunting is because it speaks of the deepest questions and emotions human face, including (but definitely not limited to) religion. Laura Marling seems to have a complicated relationship with religion, sometimes invoking God’s name in love or reverence, and sometimes in gentle mocking. For example, Laura sings, “if he made me in his image, then he’s a failure too,” in “Failure.” At other times, she uses God’s name for emphasis, such as in “It’s Only My Opinion,” when she says, “God, we’re so controlling/What am I to do?/I’m not going to sit here/And just wait for truth.” (I am obviously a fan of the last two lines, as I am trying to be a truth-seeker right now.)

Marling herself has admitted a few times to her own religious background, as varied as it is. In 2008, she said to The Sunday Times, “‘I don’t have a religious family…but I’m quite susceptible to religion. I went to church by myself until I was 12, then I was a Buddhist for four years.'” However, my favorite of her quotes came from The Sentimentalist Magazine in 2008; when asked to explain why religion is such a driving force of inspiration for art, she explained:

People are searching for some sort of feeling of community. Now a lot of people find it in atheism. I’ve never met anyone seriously religious and still young and did all of the things that young people do. If you put all the best parts of religion together you’d have a perfect person but there’s something that isn’t perfect about religion and that’s why there’s no perfect person. But the best freedom we have is the freedom to question (religion).

That’s the best approval of maybetheism that I’ve ever heard.

Xmas: “Christ” Was Never Being “Taken Out”

As the year ends